It’s been five years since Best Buy unwittingly acquired the “showroom” moniker thanks to online-upstart-turned-serious-competitor Amazon.com. I’ve previously detailed the showroom showdown between the two electronics giants as well as Best Buy’s issues converting its shoppers into buyers. And since then, Best Buy has made concerted efforts to improve its profile among consumers by investing in customer service, updating the in-store experience (e.g. the Samsung Experience Shop), and promoting the Internet of Things (IoT) while minimizing the space out-of-date products waste on the sales floor (so long, digital cameras). Perhaps more importantly, though, Best Buy implemented a competitor price matching policy aimed at preventing shoppers from leaving stores (or abandoning its website) empty-handed. So how have consumers reacted to Best Buy’s changes? New analysis from Prosper Insights & Analytics’ monthly survey of more than 6,000 U.S. consumers nationwide reveals the progress Best Buy has made with shoppers over the past five years as well as the challenges that continue to haunt the electronics retailer in its battle with Amazon.

Up first is a look at the competitive landscape for electronics. Within our monthly survey, Prosper tracks “customer preference share,” asking consumers, via unaided, write-in questions, where they shop most often for a variety of merchandise categories – identified as a retailer’s “most loyal” or “core” shoppers. Within electronics, Best Buy continues to be the favorite among consumers overall, with more than one in three shopping the big box most often, followed by what has become a very tight race between Walmart and Amazon. Clearly, although Jeff Bezos’ behemoth has seriously ascended in the electronics category over the last half decade, Best Buy has been able to hang onto its core shoppers, a significant feat in the world according to Amazon – and one that Walmart cannot similarly claim. Best Buy shoppers aren’t immune to Amazon’s charms, though; currently two in five Best Buy loyalists are also Amazon Prime members. And, this figure is growing at a faster rate than the overall average. 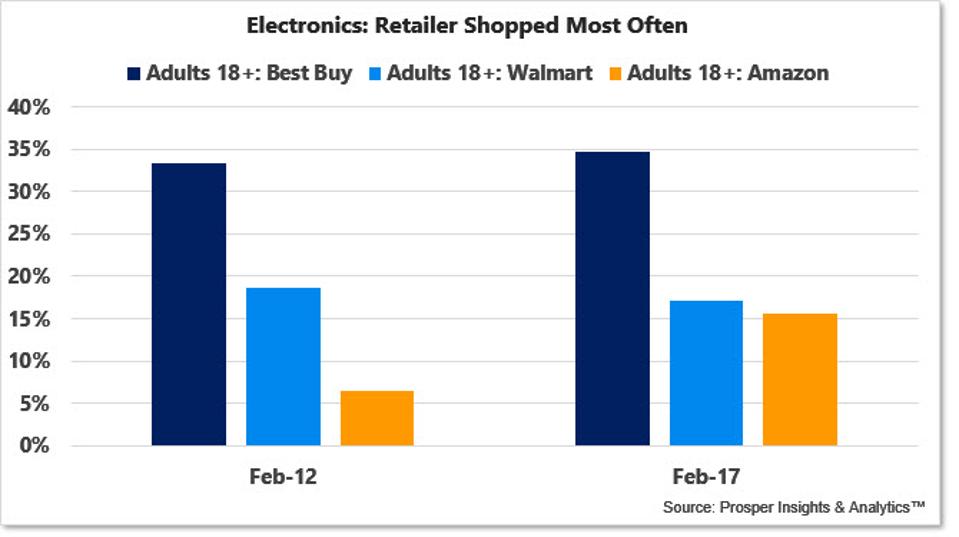 An additional test of shopper loyalty comes with a look at the electronics retailers that customers perused recently (November/December/January, aka Best Buy’s fiscal Q4, aka the holiday season). In early February, Prosper queried consumers on the retailers they shopped over the past 90 days. While Best Buy maintains the aforementioned top spot in customer preference overall, consumers were actually more likely to shop Amazon for electronics (37.4%) than Best Buy (31.3%) in November, December, and January. Further, Amazon has held onto these bragging rights over the same time frame for the past four years. It’s a continuation of a harsh reality for Best Buy: consumers are flocking to Amazon to research, browse, and potentially purchase electronics – and this trend will likely continue to propel Amazon’s position within this category.

Among core customers for Best Buy, the big box fares a bit more favorably; more than half (51.8%) visited a Best Buy store or BestBuy.com during this critical time period while fewer (35.5%) perused Amazon.com specifically for electronics. Additionally, Best Buy shoppers were more likely to have recently shopped the electronics big box compared to this same period a year ago as well as five years ago. Their propensity to shop Amazon for electronics has also increased at about the same rate, but it does seem that Best Buy has been able to sustain the attentions of its core shoppers, maintaining a 15 to 16 percentage point spread between itself and rival Amazon. This may be a bit of a “glass half full” viewpoint for Best Buy, but in Amazon-driven retailing, these old guard competitors need to take what they can get. 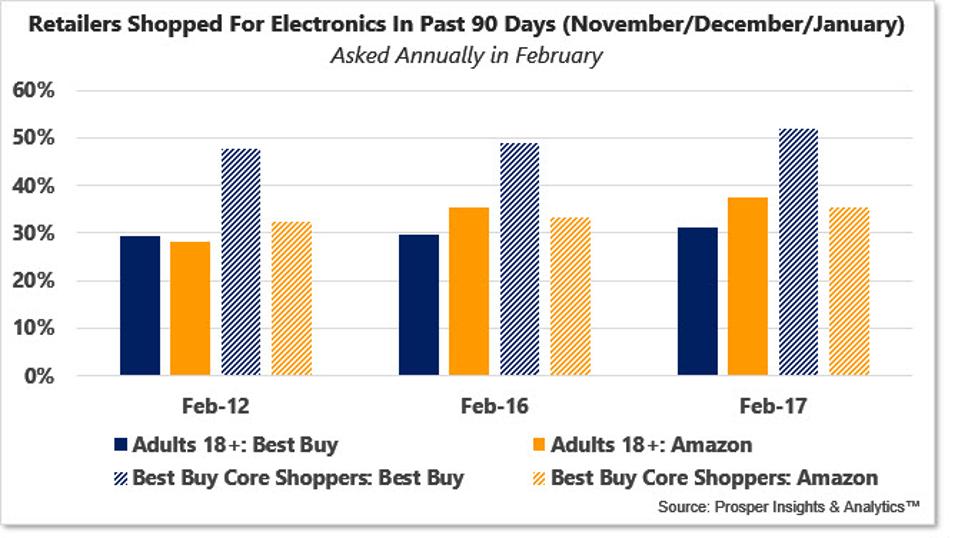 Unfortunately for Best Buy, Amazon’s might in the electronics category becomes more apparent when evaluating 18 to 34 year olds. Young consumers are particularly worthwhile to consider given their big spending habits in this category, where their annual electronics expenditures outpace the overall average by more than 25%. It’s a continuation of the general trend; despite the fact that they side with Best Buy over Amazon as the retailer they head to “most often” for electronics, during the recent November/December/January time period, the majority of 18 to 34 year olds (55.9%) shopped Amazon for electronics, more than 30% higher than those who browsed Best Buy or BestBuy.com (42.2%). Figures for each retailer increased 15% and 13% year-over-year, respectively, though Amazon is increasingly distancing itself from Best Buy; this year’s 13.7 percentage point spread is an increase from last year’s 11.5. The upside for Best Buy is that while Amazon clearly has a captive audience among the lucrative under-35 segment, the big box has remained a relevant part of their consideration sets. However, on the “glass half empty” side of things for Best Buy, these type of short-term shopper trends are likely to turn into long-term gains for Amazon.